Performance Enhancing Drugs (or PEDS) are all too often in Major League Baseball news. What is all the talk about using an * for PED era records? Why does this issue matter? How does it impact what we are doing with the program? In our newsletter this month President Kristin takes a few minutes to break down the topic and especially why it matters to the kids we serve. 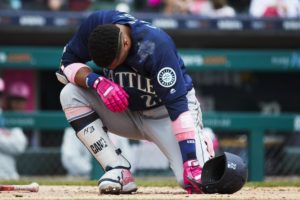 PEDS…..What are they good for? Absolutely NOTHING!
(Sorry to those of you in a certain generation that now have a song stuck in your head from my heading.)

I was given the amazing opportunity earlier this month to spend a sweet, uninterrupted day in Cooperstown at the National Baseball Hall of Fame. Any baseball fan should take the opportunity to go and I would suggest going in the down season like I did. There were no lines to get in, no one stood in front of me as I slowly took in all of the information and memorabilia in the three floors of the museum and I could touch each and every plaque in The Hall itself. I didn’t, but I could have.

One thing that surprised me was the amount of time spent on the topic of PEDs. There were polls to take about whether or not, you the fan, thought the use of PEDs was an important note around baseball fame; whole walls speaking to the Barry Bonds and Mark McGuire seasons where the home run records were crushed and where steroid use was a likely aid. For many, people who use steroids should not be admitted into the Hall of Fame and some say their records should stand but only with a little * behind them. I have opinions about both of those things but that isn’t really what’s important here.

It is against the MLB rules to use PEDs. This includes certain diuretics athletes might use to aid in the healing process but can also be used to trick tests by cleaning a drug out of the player’s system rapidly. PED use in baseball was on my mind when a few days later news broke that Robinson Cano, a very highly regarded and successful Dominican player tested positive for one of these banned diuretics. His response, similar to others in his shoes was that he didn’t know what he was taking. He claims he just took what a Dominican doctor gave him. (I could add further commentary about the Dominican medical system and corruption here but will save that for another conversation)

In my mind, as a person who is helping to shepard the next generation of Dominican ball players the issue around PEDs goes beyond the health aspects and the “it’s the rules” rhetoric. Don’t get me wrong, both of those issues are important but what has been more telling to me, and what I believe is the bigger issue for our kids is the idea around personal responsibility. When you ask kids about it in the DR across the board they will tell you it would be possible to not know what they were taking but if a doctor gave it to them it was fine. This feigned ignorance is not acceptable. Someone like Cano who knows PED use can ruin his career and taint the image he is projecting for the next generation should be responsible for knowing better. He is a role model to the kids in the Dominican Republic as well as here in the United States. If we don’t talk to our kids about the damage PEDs can do to their bodies as well as the example they are projecting to others we miss the mark.

Alex Colome is another Dominican player who tested positive for PEDs. Before the start of the 2014 season he was found to have used a drug called Boldenone, a steroid known to treat horses. He was given the nickname “El Caballo” (“the horse”) after he came back from his 50 game suspension; a name he still uses proudly.

This goes further to demonstrate my point. Why in the world does he wear the title of PED user proudly and why are we not doing anything about it? It should be a stigma one can’t shake and instead, other than perhaps hurting his chances of getting into the Hall of Fame, it is taken lightly and not given the weight it should be. I believe it is part of our job in mentoring these kids to talk about this. We need to talk about personal responsibility when we make mistakes and also to talk about the grace that comes from Christ when we do make mistakes.

That is the crucial piece for me in our program. We get to talk about the fact that we all fall short but that we need to try to walk in the steps Jesus has laid out for us. When we fall short we can take responsibility, ask for forgiveness and it’s given to us no questions asked because of the grace of God. So yes, I just took us from PEDs to Christ. It’s there everyday. We just need to be the ones speaking those words to our kids.

Will you pray with me for opportunity to share these types of practical heart lessons with our kids and for God to place the people in the program that can share these sentiments with them on a daily basis?

Thank you for hanging with me through this somewhat longer newsletter today. I hope it has caused some thought and maybe opened ideas for conversation within your own families. Thanks for the ongoing prayers for our kids!

Be part of the solution. Donate Here